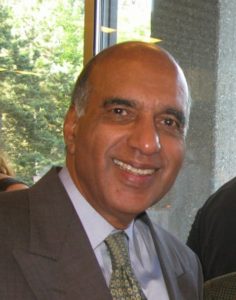 Anees Ahmad, a chartered accountant by training, joined the ILO in 1966, in the Finance Department. He worked his way up to Head of the Regular Budget Unit. He was transfered to the Cabinet of the ILO Director General in 1979, and rose to the position of Chef de Cabinet. From there, Anees was appointed Director of the Financial and Administrative Services Department in 1987. In 1988, he was promoted to Assistant Director General as Treasurer and Financial Comptroller of the ILO. He retired in 2002.

The author of the tribute Zafar Shaheed joined the ILO in 1979, in the Labour Law and Labour Relations Branch, to work in the area of wages until 1999. For the last ten years of his career, he was Director of the Department of Fundamental Principles and Rights at Work. He retired in 2009, following which he enjoyed working as Co-Editor of ILO Friends’ Newsletter.

How many things could be said about our Anees, from so many people, so widely was he appreciated and loved. Others in a better position than me could tell you about his brilliant professional career at the ILO. I would like to tell you some personal anecdotes.

Our family’s connection with Anees goes back to his father, who was a senior colleague of my father in the Ministry of Labour in Pakistan. That jovial gentleman then became Director of the Standards Department of the ILO. When my father visited Geneva in the early 1950s as a Government delegate to the Governing Body and the Conference, he continued to see Anees’ father. Once, my father asked him, “Ahmad Sahib, what exactly does your work consist of?” Mr.Ahmad’s response was, “Oh, I don’t do any work. I get people like that excellent Valticos to work. And that’s easy, because he loves work.” An early statement regarding the essence of direction and delegation in bureaucracies. Mr. Valticos became a life-long family friend of the Ahmads, and would take Anees and his elder brother Zaheer skiing and other outings.

Anees would often visit us, once he completed his studies and joined the ILO. When I turned sixteen, he asked my father if he could take me flying. Naturally my father agreed and I was thrilled  at this birthday present. I recall vividly that day, as we flew over the Salève and then the Jura, and he gave me the controls for a while. How exciting. A man of tradition, but abhorring sentimentalism, Anees approached me in turn when my son Ameer turned sixteen: “If your son would like it, I should like to take him flying, with your permission.” Naturally I agreed, and Ameer was as delighted as I had been at the prospect and then the reality of flying with Anees Chacha (uncle).

There are many memories from the ILO, naturally. One is from 1983, when I had gone on home-leave to Pakistan, and returned with the news that I was married, my bride soon to join me. Everyone greeted me with congratulations, except Anees. He hurriedly took me down for a coffee, and with a look of great concern: “What happened? Tell me about it, yaar (buddy). They forced you into getting married, right? You poor fellow…” The confirmed bachelor was convinced that in all sanity, I could not have wilfully gotten married! He may have hoped that I might well be a bachelor-type in the making. In the event, of course, he welcomed my wife Shahnaz with open arms, they became friends and she naturally shares my grief today.

An earlier memory relates to China resuming its rightful seat at the ILO.  Anees had accompanied the Director General Blanchard to China, to open the door. Upon return, he called me to brief me on their visit. Then he said, “Now, we need to introduce the Chinese to our Office and the way it works. Of course, they know all this in theory. But its important that they learn the ropes of the reality that awaits them. There is a special delegation of three officials arriving soon, and I am supposed to guide them. However, I don’t do that sort of work any more. So I would like you to do it.” He obtained permission from my bosses that I be seconded to this task. When I look back at it, it was very much also an introduction to the ILO for me. After all, I was also new to the ILO, and this gave me the intensive opportunity to meet all the technical and administrative units of the Office, along with their bosses, and to learn what they do. Anees made it sound as if I were taking a burden off his hands, but he actually did me a favour, in his unique straightforward manner.

He had such natural charm and vivacious warmth. For me the greatest thing about Anees was his equality of treatment. He treated the Office Director the same way as he treated the doorman or the driver, and treated a Minister the same way as he did a messenger. He treated all alike, and all loved him, women and men, young and old.  In many ways, Anees was larger than life, a big presence difficult not to be impressed by. Only once did I see him looking in awe of someone – and that was with his brother Zaheer. You should have seen the admiration and adoration in Anees’ body language, basking in the glory of his big brother. He seemed delighted to just relax in the shadow of this fellow who was even more daunting a character than himself.

Now that he’s left us, Anees’ shine is even greater. He has gone ahead, and I imagine him standing at the door, holding it ajar for us – with a mischievous twinkle in his eyes, and his laugh, guffawing just like his father and his brother Naseer , and smiling bright just like his mum. He’s now reunited with this core family, all beaming out to us down here. Cheers, mate.