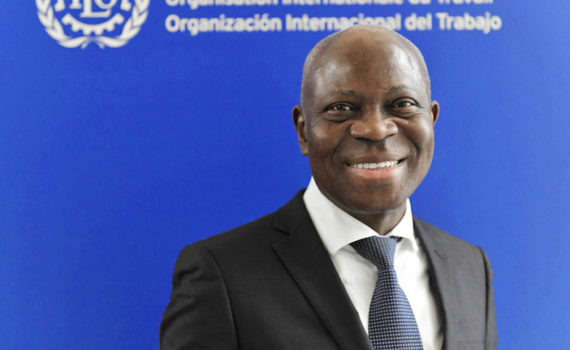 Gilbert F. Houngbo has been elected as the eleventh ILO Director-General by the ILO Governing Body on 25 March 2022. The five-year term of the Director-General elect will run from 1 October 2022 to 30 September 2027.

Gilbert F. Houngbo, from Togo, is currently President of the International Fund for Agricultural Development (IFAD).

Gilbert F. Houngbo​ was elected by the ILO’s Governing Body, comprising representatives of governments, workers and employers, during their meeting in Geneva. He will be the 11th Director-General of the ILO, and the first African to hold the post.​

Gilbert Houngbo is a seasoned executive with a track record of more than 35 years in the field of international development. A former Prime Minister of Togo and Deputy Director-General of the ILO, he has high-level leadership experience in government, the United Nations, International Financial Institutions and the private sector. He is a skilled political negotiator and a determined driver of institutional reforms, organizational restructuring, achieving efficiency gains and conducting successful policy reforms.​

The ILO’s Governing Body is composed of 56 titular members (28 Governments, 14 Employers and 14 Workers) and 66 deputy members (28 Governments, 19 Employers and 19 Workers). The Employer and Worker members are elected in their individual capacity. The ILO is the oldest specialized agency of the UN. It was founded in 1919 and has a mandate to promote social justice and decent work for all. It has 187 Member States.