Centenary celebration at the invitation of the Former Officials Section, 28 May 2019

In 2019, the centenary year of the Organization’s creation, the ILO Former Officials Section took the initiative of organizing a celebration. This was very much helped by the willingness of Director General Guy Ryder to involve retired staff in the commemorations. Starting in 2017, working meetings were held at the instigation of Antoinette Juvet-Mir, ILO Chief of Protocol.

The first initiative launched by the Section was to compile testimony from retired officials; it was a pleasant surprise to find how far the results exceeded expectations. Close to a hundred such submissions were handled by Ivan Elsmark, Editor of Message, and published in various issues, especially No. 64 devoted entirely to the Centenary. (They are also available on the section’s website: http://www.anciens-bit-ilo.org.)

The afternoon of 28 May 2019 was a particular highlight of the section’s Centenary celebrations. More than 400 retired staff members and their partners took up the invitation to meet in the ILO Governing Body room and relive some of the highlights of the eventful history of the ILO. After the welcoming remarks of François Kientzler, Executive Secretary of the Former Officials Section, Guy Ryder set out the major issues of the Centenary International Labour Conference, due to begin in a few days. Ivan Elsmark then reviewed the work of gathering testimony from retired staff. Christine Cornwell, one of those responsible for preparing the afternoon, agreed to take the chair and moderate proceedings. A series of videos recalled key moments from the Organization’s past, such as the laying of the cornerstone of the William Rappard building that served as headquarters of the ILO for several decades, as well as sequences specifically evoking well-known ILO personalities and the mandates of the only tripartite international organization.

The historical videos were followed by retired protagonists in the ILO’s activities across the continents sharing their experiences. François Trémaud spoke of the then Director General’s intercession when the Solidarity trade union was in difficulty and its leader Lech Walesa imprisoned. Dan Cunniah recalled the ILO’s interventions in support of new democracies in Guinea and South Africa, citing Nelson Mandela and the end of apartheid in particular. Barbara Murray outlined the dedicated programme in Asia designed to integrate people with disabilities into the world of work and subsequently exported to other continents. A fourth intervention, by Alejandro Bonilla, focused on ILO action in Haiti in 2010 in cooperation with other international organizations, after the earthquake devastated parts of the country, depriving it of the essentials.

Originally scheduled to address the audience for a few minutes, Guy Ryder participated in the entire session. All the interventions and videos generated a great deal of emotion, confirmed by many participants after the session. A more convivial video allowed participants to travel around the world and experience with delegates from ILO external offices the celebrations being held there. At the request of Christine Cornwell, the room offered a huge ovation to all retired ILO colleagues around the world. On leaving the room, retirees were able to enjoy an exhibition on R3 by the ILO Arts and Decoration Circle on the theme of the Centenary as well as a presentation of ILO stamps published around the world over the past hundred years.

Next a cocktail party brought all participants together in the Gobelins area. It provided the opportunity for lively reunions between friends and former colleagues. On the way out, the Former Officials Section distributed a copy of Message No. 64, a Centenary special issue, and invited those who are not yet members of the Section to join. The afternoon was greatly appreciated by the retired colleagues who attended, and we would like to thank the officials of the various ILO departments whose cooperation was so instrumental in its success, in particular those from DCOMM, Archives and Official Meetings. We also thank all the volunteers who served the drinks and the staff and management of Eldora caterers for contributing to the success of the event. 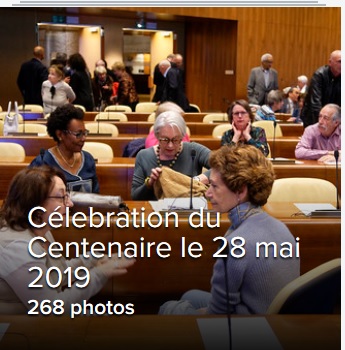 Centenary lunch at the invitation of the DG, 11 July 2019

On 11 July 2019, more than 300 retired staff members and their partners answered the invitation of Director General Guy Ryder to a lunch to celebrate the ILO Centenary. At the entrance to the ILO restaurant, ushered in by active ILO staff, participants were offered a welcoming drink and invited to take their seat. Contacts between colleagues and friends were established and an opportunity to make new acquaintances was also provided. Following a welcome from Mark Levin, Director of HRD, the DG addressed the participants by summarizing the results of the ILC, which concluded with the adoption of a Centenary Declaration for the Future of Work, and a Convention and Recommendation on violence and harassment in the world of work.

On behalf of ILO retired staff, François Kientzler, Executive Secretary of the Former Officials Section, thanked the DG for taking the initiative to host this lunch, and especially for involving retired staff in the ILO Centenary celebrations: many had been able to attend the seminars. He recalled how the Section had been committed to these celebrations, including the compilation and publication of members’ experiences and organizing the 28 May event, which had been a great success. The Centenary had strengthened the bonds between retired staff and the ILO, and he hoped that this cooperation could continue. He particularly thanked Antoinette Juvet-Mir for facilitating the organization of the events proposed by the Former Officials Section.

The dessert course saw the arrival of a huge birthday cake: Mark Levin and François Kientzler had the honour of cutting the first slices, to the tune of Happy Birthday performed by the DG. Dozens of camera phone enthusiasts clustered around the cake to immortalize the historic moment. As they made their exit, participants were given a copy of If you want peace, cultivate justice, a photographic history tracing the ILO’s first 100 years, whose title summarizes the ethos and philosophy of the ILO. In the words of many of the participants, this had been a very happy afternoon.

The 2019 ILO Centenary year, despite its many events and exhibitions, still allowed the members of the ILO Art and Decoration Circle to express themselves. The exhibition was not held as usual in the Colonnades but near the conference rooms on R3 South. The opening of the exhibition formed part of the event to celebrate the ILO Centenary organized by the Section of Former ILO Officials on 28 May 2019. This special event was held in the Governing Body Room and was followed by a reception at the Espace Gobelins. The exhibits were much appreciated by the more than 400 retirees who attended.

All the works on display dealt with the theme of the ILO Centenary. While some were more symbolic representations of the presence and action of the ILO throughout the world, others expressed very real situations of the world of work and its constraints: 100 stones laid = 100 years of the ILO; human rights, justice and equality; the universe supported by the work of man; women at work in the fields, at the market, traditional work and trades; the arduousness of the work; etc.

The exhibition was held over the 4 weeks from May 27 to June 21, 2019. Initially planned for 2 weeks, it was extended for the period of the International Labour Conference and was able to be seen by delegates from all parts of the world. We thank all the artists who contributed to this special ILO Centenary exhibition; the works proposed could be included in an upcoming exhibition of the Circle. 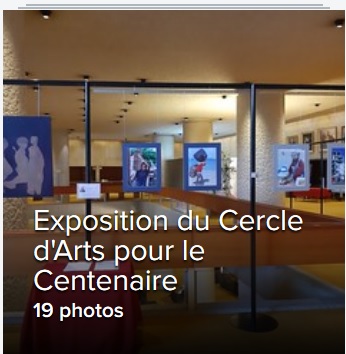 On the initiative of the Association of Former International Civil Servants for Development (Greycells) and in cooperation with the Help Us to Help foundation and their respective presidents Alejandro Bonilla and Fabio Ramirez, a golf competition was organized on 15 September 2019 at the Evian Resort Golf Club to celebrate the ILO Centenary for the benefit of miners in the informal economy in Colombia. The competition brought together 25 participants, including active and retired ILO staff as well as members of the Evian Resort Golf Club, the International Golf Club of Geneva and Rotary Club Genève International among others.

This sporting and festive occasion linked with two others, the Summit for Social Justice in Mont Blanc, and the ILO’s 100 km New York bike event for “a just transition to a greener economy”. The ILO Centenary Cup reminded us of the importance of setting long- and short-term goals and doing everything possible to achieve them in the most effective way and in accordance with established standards. Each of the first 17 holes represented one of the 17 Sustainable Development Goals, while the 18th stood for a personal goal that each of us should define and achieve, both at the personal level and that of our loved ones.

The ILO and the Former Officials Section both supported the initiative, which provided another channel for discussing and publicizing the ILO Centenary. The competition was over 18 holes, taking about five hours; one participant said she had walked 15km on very uneven terrain.

Beneath the banners of the ILO and the Centenary, Alejandro Bonilla presented each participant with a commemorative diploma together with a medal and a pin, all marked with the Centenary logo. Fabio Ramirez spoke about the foundation’s work with Colombian female emerald miners, the beneficiaries of the event. To conclude the ceremony, after a few words on the ILO Centenary, François Kientzler, Executive Secretary of the Former Officials Section, presented the trophies to the winners in both men’s and women’s categories. Then, in a very relaxed atmosphere, glasses were raised to friendship on the golf course; participants on this sunny day were able to enjoy the beautiful green setting with superb views of Lake Geneva. All agreed to repeat the initiative next year. 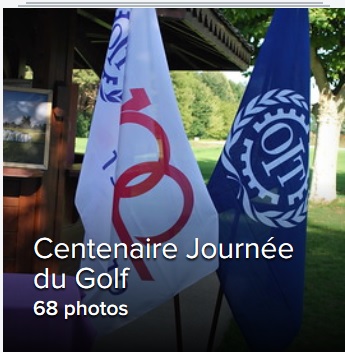 Celebratory event for the ILO Centenary on 28 mai 2019 – Details

SECTION OF FORMER OFFICIALS OF THE INTERNATIONAL LABOUR OFFICE

SELECTION OF VIDEOS FROM THE PAST

VIDEO No. 2: The First Years

VIDEO No. 3: Some decisive moments in ILO history

VIDEO No. 4: Highlights at ILO

ILO ACTION IN THE REGIONS

Dan Cunniah:  The impact of ILO interventions in Africa

Alejandro Bonilla Garcia:  The ILO tripartite response to natural disasters: The case of the 2010 earthquake in Haiti

VIDEO No. 7: Special contribution from retirees in Asia

TURNING TO THE FUTURE

VIDEO No. 8:  Launch of the Report by the Global Commission on the Future of Work: Work for a brighter future

CLOSING AND VOTE OF THANKS

INVITATION TO JOIN THE RECEPTION

SPECIAL THANKS To:  The Director-General, Guy Ryder.

Retirees’ contribution to the Centenary