The biannual receptions are always much enjoyed by retired officials. They are not only an occasion to meet old friends and colleagues, but a manifestation of interest and loyalty in the Organisation. This year it was attended by more than 150 people, some of whom have travelled far to be present.

As a formal opening Mr Mark Levin, Director of HRD, welcomed the participants. He introduced Ms Debora Greenfield, Deputy Director-General in charge of the Policy Portfolio, who would be speaking on behalf of the Director-General who at present was absent from Geneva on mission.

Ms Greenfield expressed her pleasure in having been asked to address former staff. Having only recently joined the ILO this was an opportunity to meet those men and women who have passed much of their professional life in the service of the Organisation. This was her first occasion to be working within a large, international organisation, and she has been impressed by the harmony and efficiency of so many different nationalities and cultures working together. This has given her an insight in the unique environment of the ILO. In closing, she gave a toast and wished everybody a Merry Christmas and a Happy New Year. Ms Greenfield’s speech was warmly applauded by all.

The last intervention was by Ivan Elsmark, representing the Section of Former Officials. On behalf of the retirees he congratulated Mr Guy Ryder with his re-election as Director-General and thanked Ms Greenfield for her kind words. He also thanked the Office for organising these receptions which he knew were highly appreciated.

He recalled that the Organisation will be celebrating its centenary in 2019 and felt that former staff were looking with pride to its achievements for social justice. His thoughts went to all those former colleagues who have been unable to be present here, and in particular those suffering from illness or neglect, who should not be forgotten. With these words he wished all a very Happy New Year. 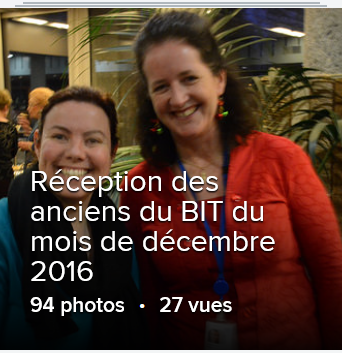