The Declaration of Philadelphia, the 75th anniversary of which we now can commemorate, is rightly considered as a landmark in ILO history and it may be interesting, at this stage, briefly to review its background, contents and continuing significance.

According to the emergency policy devised in 1938, in case of war the ILO was to “endeavour to maintain its functions and services as far as it might prove practicable.”

In line with that policy, the ILO set up its wartime working centre in Montreal, Canada, and apart from a number of operational activities, held several meetings and Conferences in the American Continent, the most important of which were:

– the New York and Washington Extraordinary Session of the International Labour Conference (27 October – 6 November 1941) as a preliminary effort to define the ILO’s post-war policies and activities.

The Acting Director’s Report (Edward Phelan was at that time still Acting Director) dealt with the ILO’s future participation in the world’s economic and social reconstruction. Addressing the final session in Washington, President Roosevelt said: “Your Organisation will have an essential part to play in building up a stable international system of social justice for all peoples everywhere.”

Inevitably, the outcome of New York was:

– the Twenty-Sixth (Ordinary) Session of the International Labour Conference (Philadelphia, 22 April – 12 May 1944).

At the apex of its wartime activities the ILO defined its policies both for the immediate reconstruction period and for the longer-term peacetime world order.

The first concern was reflected in Recommendations No. 67 through 73; the second, in the unanimously adopted “Declaration of Philadelphia”, in the drafting of which Phelan and Jenks (then ILO Legal Adviser) played a prominent role. 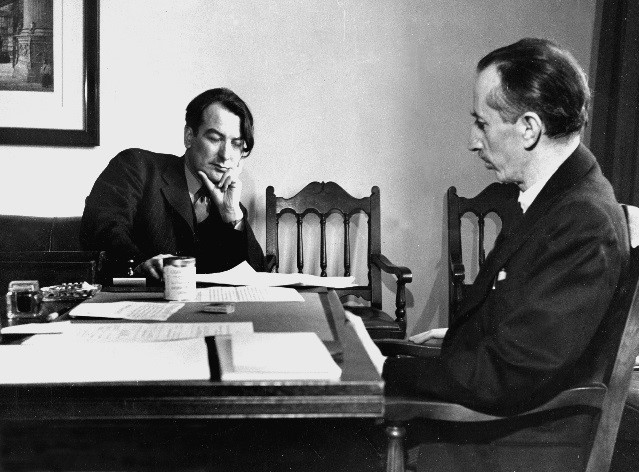 Jenks and Phelan working on the draft Declaration

The full title of the Declaration is self-explanatory: “Declaration concerning the Aims and Purposes of the International Labour Organisation”, and the Preamble refers to “the principles that should inspire the policy of its Members”, thus pointing to the dual character of commitments (the Organisation to its Members; the Members to the Organisation).

Apart from the Preamble, the Declaration is divided into five parts.

Part I reaffirms the fundamental principles on which the Organisation is based, and in particular: labour is not a commodity; freedom of expression and association are essential to sustained progress; poverty anywhere constitutes a danger to prosperity everywhere; in the unrelenting war against want with a view to promoting the common welfare, national efforts must be combined with international cooperation on a free, democratic, tripartite basis.

Part II spells out the implications of the fundamental ILO principle that “lasting peace can be established only if it is based on social justice”, namely: equality of rights and opportunities for all human beings, without distinction, must be the central aim of national and international policies and measures, including those of an economic and financial character; ILO responsibility for examining and considering such policies and measures in the light of that fundamental objective and, as part of its functions, for introducing or recommending any provisions which it considers appropriate..

With this affirmation, the principle of equality of all human beings, passed for the first time into a statement of the aims and purposes of a world organization, so that the ILO Declaration in a way set a pattern for the United Nations Universal Charter and Declaration of  Human Rights.

Part III refers to the ILO’s solemn obligation to further programmes for achieving full employment and the raising of living standards by various means: adequate jobs according to workers’ skills; vocational training: labour transfer and migration, wage and earning policies; hours of work and other working conditions; collective bargaining; labour-management cooperation in the continuous improvement of productive efficiency and the preparation of social and economic measures; social security, including medical care, for all; occupational safety and health policies; child welfare and maternity protection; adequate nutrition and housing, and facilities for recreation and culture; equality of educational and vocational opportunities.

Part IV relates to the fulfilment of the abovementioned social programme with “the fuller and broader utilisation of the world’s productive resources” and to this end, recommends “effective international and national action”, namely: production and consumption expansion; avoidance of severe economic fluctuations; economic and social assistance to less developed regions; greater stability in world prices of primary products; promotion of international trade.

In this perspective, the ILO pledges its full cooperation with “such international bodies as may be entrusted with a share of the responsibility for this great task and for the promotion of the health, education and wellbeing of all peoples.”

Part V specifies the universal value of the principles set forth in the Declaration. Their application “must be determined with due regard to the stage of economic and social development reached by each people”, but their progressive application “to peoples that are still dependent, as well as to those who have already achieved self-government, is a matter of concern to the whole civilised world.”

In defining and announcing its medium and long-term objectives and programmes, the ILO unequivocally claimed its share of responsibility in building the postwar world order as well as its rightful position in the planned United Nations Family.

The Declaration was a renewed pledge to the ideals of Peace, Development and Social Justice, seen as the supreme common weal, that had guided the ILO together with the whole League of Nations system ever since 1919. It stressed the importance of international technical cooperation and clearly anticipated globalization.

As such the Declaration was meant from the start to be a key ILO document. It updated the contents and extended the scope of Article 41 (known as the “Labour Charter”, that bore the seal of Samuel Gompers) of the initial ILO Constitution which in 1944 was still Part XIII of the Versailles Peace Treaty.  It was therefore logical that, as a substitute for old Article 41, the Philadelphia Declaration should become  an integrated part of the Constitution  of the International Labour Organization when the latter was revised in 1946.

For the ILO as well as the international community at large, the Philadelphia Declaration is as relevant and binding today as when it was signed  many decades ago. 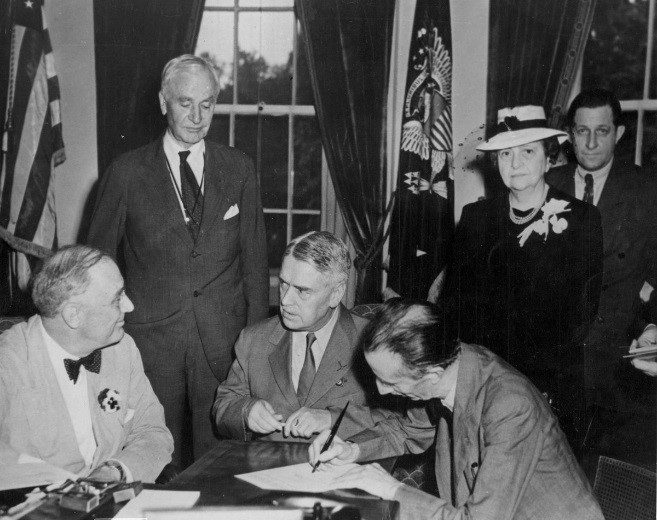 Edward J. Phelan signing the Declaration of Philadelphia on 17 May1944 at a meeting with President Roosevelt at the White House in Washington. Also present are: Secretary of State Cordell Hull, the President of the ILO Philadelphia Conference Walter Nash, US Secretary of Labor Frances Perkins and ILO Assistant Director Lindsay Rogers